You Can Go in December! Hatsumode – Start the New Year with Osaka Metro In Japan, it is customary to visit a shrine to pray for a peaceful year when the new year arrives. This is called Hatsumode, literally meaning the first visit or first pilgrimage. Sumiyoshi Taisha is said to have the most Hatsumode visitors in Osaka and some 2 million people visit this famous shrine at the beginning of every year. While there’s no specific rule, typically many go for Hatsumode on January 1 or, if not, by the 3rd day of the new year.
Some shrines designate certain days and times for prayers—something to consider when deciding where to go.

For the New Year 2022, in order to prevent the spread of the novel coronavirus, some shrines have cancelled yatai stalls and people are encouraged to wear masks and avoid the peak days, the first three days of the New Year. You can even go early in December—it’s called “Saisaki-mode”, a new service offered at select temples due to the pandemic. New forms of Hatsumode, such as online shrine visits and mail in prayers and amulets, are also safe ways to start the New Year!

Take Osaka Metro to Hatsumode☆
Where To?

Traditionally, people visited shrines in the neighborhood but, in recent times, more and more people go out farther to a shrine that offers blessings for the specific wish they have. Take a moment and think about your wish and goals for the year and find a shrine that fits your needs.
Here’re some spots in Osaka that are great for Hatsumode!

Tsuyunoten Shrine is located in the middle of Umeda, a mere 3-minute walk from Higashi-Umeda Station. In the tragic story of “Sonezaki Shinju”—the love suicides at Sonezaki—written by Chikamatsu Monzaemon for ningyo joruri (Japanese traditional puppet theater) during the Edo period (1603-1868), a couple pursues each other despite obstacles and decides to die together in Sonezaki where the shrine is located. The story is an example of true love, popular among women still today. The shrine is also known as “Ohatsu-tenjin,” taking the name of the heroin, Ohatsu. A quick 2-minute walk from Minamimorimachi Station, Osaka Temmangu sits next to Tenjinbashisuji Shotengai, Japan’s longest shotengai shopping street. Affectionately called “Temma no Tenjin-san” (Tenjin-san of Temma) by the locals, Osaka Temmangu is known for its deity of scholarship and often visited by students preparing for school entrance exams. The shrine is also known for household safety and protection against evil and offers a variety of amulets and ema (small wooden plaques for prayers or wishes) to grant academic and non-academic wishes. On July 24th and 25th every year, Osaka Temmangu hosts the Tenjin Matsuri Festival, one of Japan’s three major festivals. Located within the Osaka Castle Park near Tanimachi 4-chome or Morinomiya Stations, Hokoku Shrine is dedicated to Toyotomi Hideyoshi, a famous general and politician who built the castle in the 16th century. Born a son of a peasant, Hideyoshi advanced his career serving multiple samurai clans in various capacity until he reached the top. Today, Hideyoshi is one of the most famous samurais, known for unifying the country. Taking after Hideyoshi’s legacy, this shrine is perfect for those with high ambitions and in search of new career. An amulet with a design of hyotan gourd, a trademark of Hideyoshi, is known for for career and financial success and popular at this shrine. Sukunahikona Shrine is located about 2-minute walk from Kitahama Station. Known amongst Osakans as the deity of health and medicine, Sukunahikona Shrine occupies a portion of a business district called Dosho-machi, which is filled with major pharmaceutical companies. The shrine offers prayers for pets, important members of many families, making it a great spot for Hatsumode with pets! The popular paper-mâché tiger amulet is perfect for 2022, the Year of Tiger! Once you know your destination, learn how to offer prayers at a shrine. By properly offering respects to deities, your prayer may be heard. Be mindful and offer prayers respectfully following these procedures.

There’s no rule for how much the small offerings should be. If you look to Japanese superstition, a little play on words would tell you 5 yen (reads “go-en” in Japanese) brings you “goen,” a chance or luck, while 11 yen brings you good luck (11 yen can be read “ii en,” “ii” meaning good in Japanese). Similarly, Japanese 5-yen and 50-yen coins—which have a hole in the middle—give you a good “mitooshi,” a good outlook or prospect for your future. 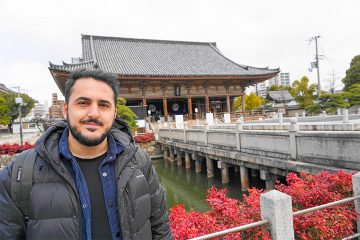