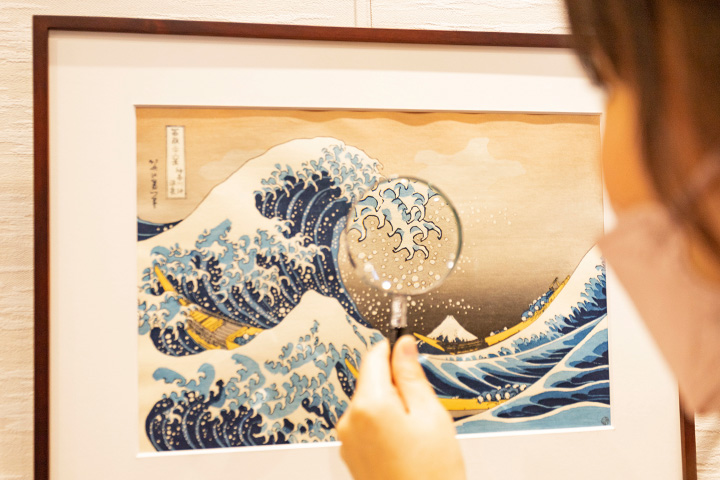 ● A Sorrowful World to A Floating World

In 17th to 19th century Japan, after the turbulent and violent Warring States period ended, stability created by the Tokugawa Shogunate brought a new era to Japanese arts and culture. By late 17th century, chonin culture was created by a class of chonin (literally “townspeople; made up of mostly merchants), which led to the development of new Japanese cultural icons including ukiyo-e, haiku, and kabuki.
Today, ukiyo-e, the colorful Japanese woodblock prints and paintings that depict various scenes of Mt. Fuji, Kabuki actors, beautiful women, etc. have captured the global audience and are known as an important genre of Japanese art.
In the City of Osaka, specialized museums offer an excellent opportunity to get to know and experience the world of ukiyo-e.

Ukiyo-e literally means the “pictures of the floating world” based on the kanji Chinese characters used to write the term today. Back in the 17th century, however, perhaps mourning the pain and vanity of the long lasting war period, “Ukiyo” was originally written as a “sorrowful world”. As political stability and economic prosperity began to allow for more leisure in chonin’s lives, the term evolved to express the glorious life of chonin in the “floating world”. Komurasaki and Hanamurasaki of the Tamaya by Kitagawa Utamaro, Osaka Ukiyoe Museum

Common themes depicted in ukiyo-e were the everyday lives and leisure of townspeople, and beautiful courtesans and kabuki actors were well-known subjects. Well-known ukiyo-e artists including Hishikawa Moronobu who created the famous “Mikaeri Bijin zu” (Looking Back Beauty) and Toshusai Sharaku who used the okubi-e (half-length portrait) technique to create actor portraits produced numerous pieces of ukiyo-e during the 17th to the 19th century.
Technically, Ukiyo-e can be a painting or a woodblock print and the latter—which can be mass produced—was supposedly worth a bowl of soba noodle soup back then, about 500 yen in today’s currency.
While ordinary people could not afford to go to a kabuki theater or the red-light district, ukiyo-e provided a way to get a peek into the world they admired. After traveling became more common in late Edo period, pieces that depicted travel sceneries created by artists like Utagawa Hiroshige and Katsuhika Hokusai became popular as well. When the 1867 Paris World Expo triggered the popularity of Japonism in Europe, ukiyo-e and other Japanese arts and crafts travelled across the ocean. It is well-known today that these Japanese arts had an influence on the Impressionist artists such as Van Gogh and Claude Monet as well as the French composer Claude Debussy.
Not as well-known is an anecdote that the prints were originally used as packing materials when exporting Japanese lacquerware and chinaware until someone happened to notice its beauty. In the world where artists were trying to escape from classics and Realism and searching for a new way of expression, the innovative concept of ukiyo-e must have left a vivid impression and inspired the artists.

That was a quick lesson on the history of ukiyo-e. Now that we understand the story behind ukiyo-e, it’s time to take a tour of Osaka’s ukiyo-e museums!

Located approximately 5-minute walk from Osaka Metro’s Shinsaibashi Station, Osaka Ukiyoe Museum sits right in the middle of the bustling Shinsaibashisuji Shotengai Shopping Street. The museum boasts a collection from the Edo period to the Meiji period centered around the works by Katsuhika Hokusai, Utagawa Hiroshige, Kitagawa Utamaro and Toshusai Sharaku. Many of the works exhibited are related to the Kansai region.

The museum’s permanent exhibit includes the Great Wave Off Kanagawa and Fine Wind, Clear Morning, aka Red Fuji, from the world-famous Thirty-six Views of Mount Fuji by Katsuhika Hokusai. The Great Wave Off Kanagawa from the Thirty-six Views of Mount Fuji by Katsuhika Hokusai, Osaka Ukiyoe Museum

One of the reasons for ukiyo-e’s expansion into the populace was the improvement of wood printing techniques around 18th century. But it wouldn’t have been for anything if not for the highly skilled carvers and printers who gave life to the artwork done by the artists. You can learn these masters’ amazing techniques at the special exhibit at the Osaka Ukiyoe Museum until Sunday, August 21.

One of the techniques introduced is kiwari, a technique used to carve hair strands in okubi-e. Some hair strands are so detailed that a few hair strands were carved one by one in a one millimeter space, a refined craftsmanship possible only by skilled carvers who were versed in a superior technique called kashira-bori (literally “head carving”). Wish to Ask a Favor, Limestone from Omi from the Celebrated Products of Mountains and Seas by Utagawa Kuniyoshi, Osaka Ukiyoe Museum
Detailed hair strands around the hairline are remarkable.

A printing technique I found fascinating was called kara-zuri (literally “empty printing”). In kara-zuri, no ink is applied to the woodblock. Instead, printers create unevenness on the paper by rubbing the woodblock rigorously onto it. This technique is used to create three-dimensional effects in kimono fabrics, or in sakura petals and snowflakes. 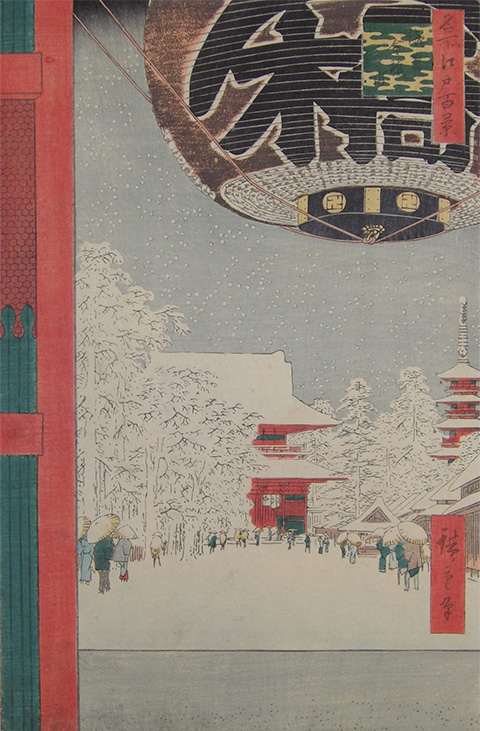 Kinryuzan Temple at Asakusa from One Hundred Views of Famous Places in Edo by Utagawa Hiroshige, Osaka Ukiyoe Museum
Footprints in snow are depicted using the kara-zuri technique.

Other printing techniques include shomen-zuri which produces a glossy effect with which the print appears different depending on the angle, and kira-zuri which uses mic (isinglass) or powdered shells to create a glittering effect. I think all these techniques speak to the depth of ukiyo-e artistry and expression.
The museum has prepared a supply of magnifying glass for rental so you can look closely to the fine details of hair strands or the snowflakes created with kara-zuri technique!

After examining the amazing mastery of ukiyo-e craftsmanship, one cannot resist the temptation to own a copy of ukiyo-e prints from the Edo period. Prints sold at the museum shop range from around 10,000 yen to a few hundred thousand yen. Visitors are welcome to take a look and select their choice(s). １．A Must-See for Kabuki Fans

Today, Dotonbori is known for Osaka’s iconic Glico neon sign and the drum playing Kuidaore doll. At one time, however, the area was known as a theater town and playhouses like Osaka Shochikuza Theatre, which is currently located behind the Glico sign, was abundant in the neighborhood. Kamigata Ukiyoe Museum showcases such history of Dotonbori. Conveniently located next to Hozenji Temple (known for its moss covered Mizukake Fudo-son statue), only 8 minute walk from Namba Station, this privately owned museum established in 2001 features select ukiyo-e under a new theme every three months. The entire collection is a private collection, selected and acquired by the museum director, Seiko Takano. Ms. Takano welcomed us with her cat at the museum entrance.

The highlight of this museum is the kabuki actor prints that were all made in Kamigata, a term used to refer to the Kansai region during the Edo period. Kamigata prints are characterized by its realistic representation and a solemn style. Indeed, I was astonished to see the elaborate and meticulous design of the kimono patterns and the realistic portrayal of a scene from kabuki performance. I’m sure a kabuki fan would know, with one glance, exactly which moment of the performance the ukiyo-e represents. It’s also interesting to compare with Edo ukiyo-e, which uses the techniques of deformation and utilizes blank spaces. Character, Matsuo-maru, checks on the beheaded head of his son who was killed as a sacrifice in the famous terakoya (temple school) scene from a Kabuki play, Sugawara Denju Tenarai Kagami

One of the characteristics of ukiyo-e is multi-color printing, with nishiki-e technique frequently used to produce vivid colors. Using the drawing created by the artist, the carver carves the design on the woodblock, and the printer completes the process. This seemingly simple process becomes complex when multiple colors are used (and they usually are), requiring more woodblocks for layered printing. Trust me, I’m speaking from experience! See, here at Kamigata Ukiyoe Museum, you can take a workshop on ukiyo-e printing. Out of the three courses offered, beginning to advanced, I chose the intermediate level because I wanted to try four-color printing. The process began with an omohan (main) woodblock which has the black outline of the design. I applied the ink onto the woodblock using a brush made with finely shredded bamboo leaves. After the ink settled evenly, I applied with another brush a little bit of glue which works as a fixing agent to help the color fastness on washi paper. Now we’re ready to print! Using a tool called Baren, I applied consistent pressure to rub the ink into the paper. It reminded me of the art class in elementary school. lol
The two markers on the left side of the woodblock are called “kento”. They play an essential role in keeping the paper in place. It’s interesting to know that a word we use in our daily lives (“kento” means direction, bearings, aim in today’s Japanese language) originated in ukiyo-e! After the outline of the design has been printed with omohan, I applied the remaining three colors one by one. The key is to start with colors that need to be applied to smaller areas and move onto colors that takes up larger areas.
It’s almost an impossible task to print the tiny red lips or the super thin layers of kimono in the right spot. In fact, the red lips came out a bit off on my ukiyo-e.
Another difficult task was evenly applying the green pigment to large areas such as the roof in my print. Hats off to ukiyo-e printers who would repeat this color laying process over and over—like 10 times, 20 times—with precision. In the advance level workshop, you can take it up a notch and learn the bokashi technique to create gradations of a color. Who is going to take on the challenge with me?!

※Please note that neither facility is equipped with elevators and escalators. Please check the official homepage for details. 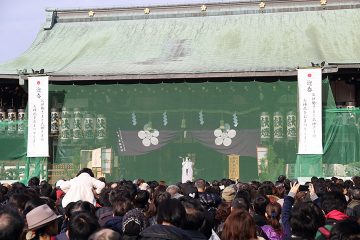 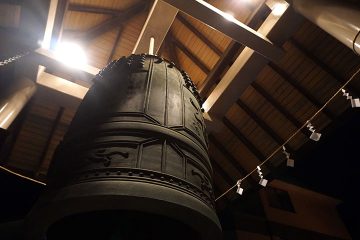 Already, 2022 is coming to an end and the beginning of a new year is …