Conveniently located within the greenery surrounding Osaka Castle, the recently opened Cool Japan Park Osaka houses 3 new theaters where you can see groundbreaking performances. With seating between 300 and well over 1,000, the new theaters also feature gorgeous widescreen panoramas of the castle, refreshment stations, and fun interactive exhibits in their foyers. We visited WW Hall to see the currently running multi-media performance KEREN. We don’t want to give away all of the surprises, but just to give you a hint of what’s in store, you will see samurai, yakuza, and mythical creatures from Japanese folklore. You will see modern businessmen and Hanshin Tigers fans take to the stage, interspersed with an original rap number, all within a 70 minute show. The unexpected and unconventional is what’s on stage and it’s wonderful! [Access] About 4 mins walk from Exit 3-A at Morinomiya Station. The Must-See Kaiyukan Aquarium, and then some! Using Osaka Kaiyu Ticket for an Exquisite Sightseeing in Osaka☆

I love marine animals. The Kaiyukan building has a unique design. Also, it’s really easy to … Save Money Traveling with the Osaka Amazing Pass! 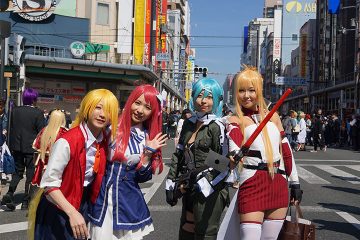 A Day In Cosplay Heaven An epic appearance of the Milky Way in Osaka!!A guide to a magical night on Tanabata, July 7.