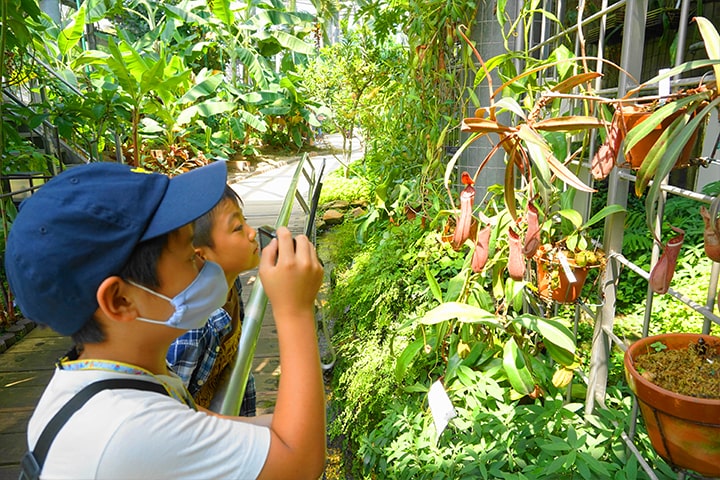 I had noticed the stylish green posters around Osaka Metro stations for a while.
And I finally took the kids to the Carnivorous Plant Exhibition!
Those boys prefer weird plants over flowers. It was perfect. The pond at the entrance of this large conservatory was filled with lotus and water lilies.

I’ve heard those giant water lilies can hold kids on them.
Wouldn’t that be fun?! Click here for details on the Lotus and Water Lily Exhibition
https://metronine.osaka/en/event/lotus-and-water-lily-exhibition/

● A Tour at One of the Largest Conservatories in Japan

We started the tour in the Humid Tropical Plant House. Ms. Oishi curated for us.
Hot and humid air created an atmosphere that felt like we were actually in the tropics. Whoa, is that ramen noodles inside?? This strange looking plant is called Panama Hat Plant.
We were very lucky; this plant flowers only for one day each year, and we got to see it!

Weird fluorescent colors looked very fitting for a jungle in a rainforest.
We saw many strange looking plants. We found some carnivorous plants in the Humid Tropical Plant House. The “drunken tree” (known as “palo borracho” in Spanish) shaped like a giant bottle came all the way from Argentina. 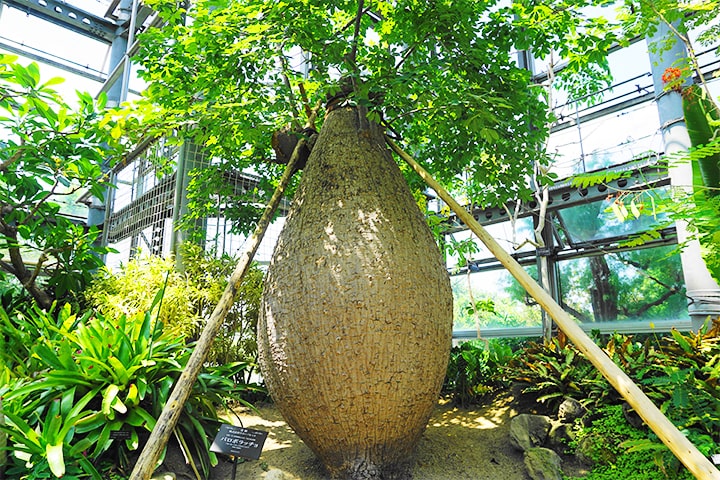 It was nice and cool in the Alpine House, a nice break after the extremely hot Plants of Arid Regions section featuring tropical plants and cacti.
We found carnivorous plants near the water here.
I had an image of bug eating plants living in the jungle, but rather they live in temperate to cold regions.

Looking down from the second-floor hallway, you can see a large Nepenthes (Tropical Pitcher Plant) in the middle of the Flower Hall below, a multi-purpose hall used as a lounge for visitors as well as for events.
We arrived at the main exhibit area. We saw so many types of Nepenthes there, each with different size pitchers.
These pitchers—just hanging from the plant—looked quite refreshing for some reason. While these pitchers all have interesting shapes, they are a bit…grotesque.
The upper pitcher rim is smooth, as if you’ve applied some candle wax, and causes insects to slip and fall into the trap.
The cavity is filled with digestive liquid, and fallen insects miserably drown and are digested there.
What a brilliant tactic for immobile plants to catch mobile insects! I was impressed.

We were wondering if any insect was trapped inside and Ms. Oishi kindly let us see it. And…there it was!!!😱
The poor insect was drowning…
It’s a bit gross to think this poor bug is going to get digested soon…
Apparently, large Nepenthes can even catch and eat a mouse.That is, indeed, gross. A single Nepenthes grows multiple pitchers at different heights and in different shapes and colors.
Some pitchers target insects on the ground and some target flying insects.
What an ingenuity. These plants are real strategists. Dionaea muscipula (Venus Flytrap) opens its leaf “jaws” and catches insects. They too have an impressive mechanism of trapping.
Inside the leaves are tiny hairs. When more than one of the hairs is touched, the leaves close quickly, trapping whatever touched them.
See, if the hair is touched only once, it could be just a raindrop. Two is the golden number that confirms it was touched by a living thing. So, Venus Flytraps wait quietly, until their hair is touched twice.
Apparently, it takes a lot of energy to trap an insect, so much that the trap dies after opening and closing the leaves about ten times. Kids were so itching to touch it.
I get it. But don’t!!

Illustrations from a children’s book called “Shokuchu Shokubutsu no Wana” (literally “traps of carnivorous plants”) were also on exhibit.
Looks like he’s falling deep into the mysterious world of grotesque carnivorous plants. So many interesting plants exist.
Each came up with its own survival method, evolving into weird yet necessary shapes as a result, as if it has a mind of its own although it doesn’t talk or move.
I had thought carnivorous plants needed to trap insects to live but learned on the tour that they can survive by taking in nutrients through their roots.
Then I guess insects are like snacks for them?? That’s an interesting thought. 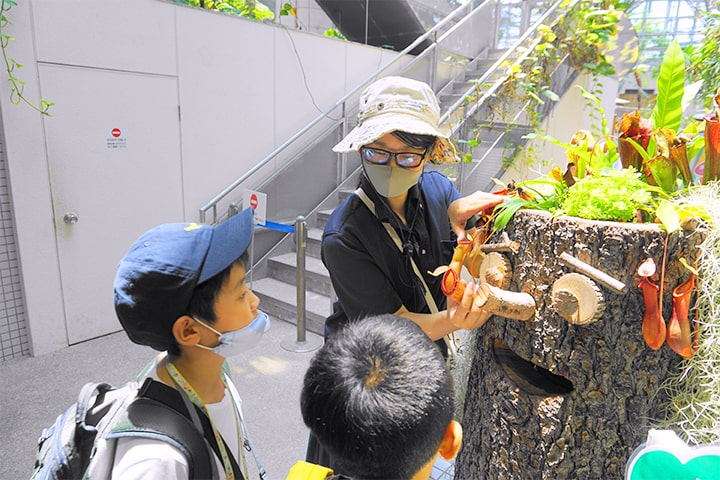 We all enjoyed those bizarre, rare plants that we don’t get to see often.
Don’t miss this wonderful opportunity to learn about various kinds of carnivorous plants!
I recommend planning on spending about two hours for your visit.
I sure hope they’ll hold the exhibit again next year; we will be back!

To find out more about the Carnivorous Plant Exhibition 2020 at Sakuya Konohana Kan, click here.
https://metronine.osaka/en/event/carnivorous-plant-exhibition/ I noticed a particular image as I was looking at cars online. A classic car juxtaposed against … Greetings from Osaka: We’re Here and Well Despite the Pandemic