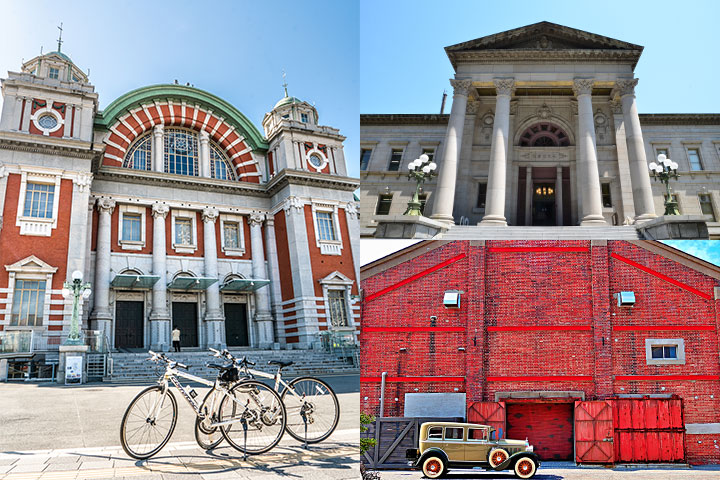 With icons like Dotonbori and Tsutenkaku Tower, many think of Osaka as colorful and rather flashy. But did you also know the city is also home to numerous beautiful Western style architecture? Step away from the busy streets of Osaka’s entertainment districts and you can enjoy a refined cityscape of an exquisite classic world.

The Age of Great Osaka…

Many of Osaka’s Western style buildings were built about 100 years ago during a period called “Dai Osaka Jidai,” the Age of Great Osaka. During the years around 1920 to 1930, the City of Osaka experienced a rapid development, even briefly surpassing Tokyo in population.

This was the time the growth of various industries including commerce and textile made Osaka Japan’s top industrial city. As the modernization progressed rapidly in this new economic and cultural center, a number of modern buildings influenced by Western style architecture were constructed in Nakanoshima and Kitahama-Semba areas. Today, you can see the remnants of Osaka’s golden age in these architectural treasures. Undoubtedly, Osaka City Central Public Hall is the most well-known architectural treasure in Osaka. Located in the Nakanoshima area sandwiched by Dojima and Tosabori Rivers, a quick 5 minutes from Osaka Metro’s Yodoyabashi or Kitahama Station, this stately building stands out with its bright red brick walls and beautiful arched roofs.
The construction of Osaka City Central Public Hall was funded with a donation from one citizen. Completed in 1918, the beloved Hall just celebrated its 100th anniversary in 2018. The Neo-Renaissance style building has an elegant exterior with a symmetrical design centered around the large arch in the middle. Inside the building, incredible details help create a solemn ambiance. You can visit the Public Hall and enjoy it inside out—take a guided tour and/or learn about its history in its gallery, or attend events such as concerts and lectures! Osaka Prefectural Nakanoshima Library, the next-door neighbor to the west of the Osaka City Central Public Hall is another representative of Osaka’s architectural treasure! It was built in 1904—14 years before the completion of the Public Hall—by the Sumitomo family who founded the Sumitomo Group, one of the largest Japanese business groups. The library was donated to the City as a corporate contribution to the community at a time when Osaka didn’t have enough educational institutions. The gorgeous exterior incorporates the designs of a Greek or Roman temple, creating a world of mythology in the center of a Japanese city. The circular dome above the open stairwell in the central hall inside is amazing especially when the light shining through one of Osaka’s oldest stained glass creates a sight to be seen! You can walk around the library freely to enjoy the architecture and take a break at the adjacent café. The Chikko Red Brick Warehouse is located about 5-minute walk from Osaka Metro’s Osakako Station in the Osaka Bay Area where Tempozan and the Kaiyukan Aquarium are located. The cluster of red brick warehouses expanding over an area of 7,300 square meters exudes presence. Chikko is the area where an international port of trade for Osaka City was built after 1897. The warehouses themselves were built by the Sumitomo Warehouse in 1923—the same Sumitomo that built the Nakanoshima Library mentioned above. In fact, the Chikko Red Brick Warehouse and Osaka Prefectural Nakanoshima Library were designed by the same architect! I personally think the Warehouse has a nostalgic feel that the Library doesn’t possess. Maybe you can visit both and compare them, too♪

Until 1999, these warehouses were used to store the goods that arrived at the port. Today, the stunning Red Brick Warehouse is a classic car museum called the GLION MUSEUM. A café and a restaurant on site make it a popular place for sightseeing and/or a nice date. ※Facilities mentioned may be closed or have altered their hours due to the coronavirus pandemic. Please check the facility’s official website for most updated information.

You can find many more architectural treasures from the Age of Great Osaka among many contemporary buildings in Osaka. Each is a valuable piece of art with its own history. Go take a stroll and you can easily explore the architecture of Osaka!

And if you’re interested in architecture or cityscapes with cool buildings, check out Osaka Metro NiNE on Instagram. You will find the photos of hidden architectural gems around the City of Osaka!

[Access] About 4 mins walk from Exit 1 at Yodoyabashi Station.
About 7 mins walk from Exit 1A at Kitahama Station.
[Hours] Monday-Friday 9:00-20:00, Saturday-Sunday 9:00-17:00
[Closed] Every Monday (if that day is a public holiday, the next day will be closed instead), the second Thursday of every month (except July and August), New Year holidays

[Access] About 5 mins walk from Exit 4 at Osakako Station.
[Hours] 11:00-17:00
※ There may be change of business hours by reservations
[Closed] Mon. (the next day if Mon. is a public holiday) It’s still cold outside and the air is clear, so we took a trip to the top of Abeno Harukas for … Every year at this time, dazzling winter illuminations begin to appear … 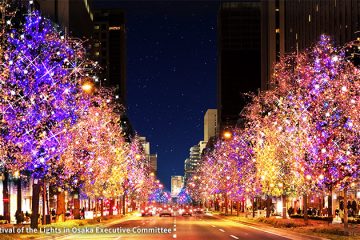 Traversing the city north to south, Midosuji is the most famous street in …