● A Japanese Writing Inspired Store in an Old Neighborhood

The Japanese writing system is complex. It uses three types of characters–Hiragana, Katakana, and Kanji–that are usually used together in a sentence. The distinct looks of these letters/characters are intriguing to many and Japanese writing inspired gifts and merchandise—from traditional scrolls to T-shirts to jewelries—are popular items around the world.

In Osaka, a store in Matsuyamachi has selections after selections of Japanese writing inspired goods that are perfect for souvenirs and gifts. Perhaps the only store in Japan with such specialization, this is where you can get creative with Japanese writing and have fun selecting a gift for someone special. Needless to say, we had to go check it out. What will we find in a shop that limits itself to Japanese letters and characters?! A LOT!

Decoboco Kotonohasha is located a mere 1-minute walk from Osaka Metro’s Matsuyamachi Station in an area where you will find narrow streets with historical houses that have been turned into art galleries and shops. Our destination is part of LEN, a cool, samurai-era looking shopping mall that consists of 13 small shops and restaurants, that used to be a traditional Japanese mansion before the renovation. As you step into the courtyard through the main gate which is designated as a Registered Tangible Cultural Property by the Japanese government along with LEN’s main building and the warehouse, you can already feel the air of historic Japan. Past the courtyard, up from the lobby on the right is the general store, Decoboco Kotonohasha. ● Over 2,000 Types of Goods That Play with Letters

Overflowing with letters and characters, Decoboco Kotonohasha has its own ambience.
It was a bit strange, in a good way, to be surrounded by Japanese writings. It felt as if I had warped into the world of alphabets. The store offers over 2,000 types of Japanese writing inspired goods, hand-selected by the owner who’s had an ardent interest in Kanji characters. The collection includes Decoboco Kotonohasha’s original goods as well as the works of artists around Japan.

Pictured above are button badges with mechanically engraved letters created by Yoshida Factory.
These button badges can be used to express little somethings (“Hay fever,” for example) or give warnings like “Caution – I’m hungry.” lol
And goods with onomatopoeia words (mimetic words that describe specific sounds) like もふもふ (fluffy) and ふみふみ (kneading cats) make a purr-fect gift for cat loving friends. These Light Switch key chains are popular fidget toys among international customers. Words written on them are simple yet interesting—“Game”, “Night Owl”, and “Temperance”. Dynamic Kanji character earrings are sure to come in handy for cosplay or parties. Huge Kanji’s like 耳 (ear) and 祝 (celebration) dangling from your ears will double the fun and are guaranteed to make you the center of attention! The most popular item right now is these earrings with cool Kanji characters.
It reads 天上天下唯我独尊 (tenjo tenge yuiga dokuson). It is a Buddhist phrase that means “in this vast world, there is a noble mission only we humans can bear.” It is said that Buddha uttered these words at his birth.
Each earring is hand made using their original fonts. Other popular words include 酒酔 (drunken) and 睡眠 (sleep). Here’s a unique souvenir from Osaka—key chains of maps made by a Map Puzzle Artist, Shintaro Oguri. All these maps represent the cities and municipalities in Osaka Prefecture and are true to the actual shape of the municipalities. It’s an original item you won’t find anywhere else.

● Customize with Your Favorite Letters!

Among all the interesting items at Decoboco Kotonohasha, my top recommendation is their original Kotonoha Charms.
You can choose your favorite letter and make a charm of your choice, and gift it to someone special (or yourself).
The collections of letters and characters to choose from include over 2,000 types you can find at the store, including Kanji, Hiragana, Katakana, and an ancient script. Look at the shelves full of letters! It’s like a treasure hunt of letters. I loved it♪ This design was created in response to requests by customers.
The character 囍 is not generally used in the Japanese language although you might have seen it in the design of a ramen bowl in Japan.
It consists of two 喜’s which means joy/happiness and means “double happiness” in Chinese. The character is considered auspicious and used in celebrations like weddings in places like China and Taiwan.

Being surrounded by all these letters and characters made me think about which letter has a special meaning to me.
I decided to look for one of the Kanji characters used in my name. 梨 (pronounced nashi) begins with the na sound, so I got the jar labeled な (na) and looked inside. Let’s see if I can find my character… There it is! In different colors! It’s a little thing but it made me happy to find my character in the midst of all these characters♪ I chose the color and the design, and went on deciding which charm to make—pins, buttons, one-sided, two-sided, necklace…I had a choice to make. I chose the one-sided charm. After a few minutes of waiting… Voila! Here’s my one and only 梨 charm. The button is made with the pure silk used in Kyo-Yuzen dyeing and has a smooth texture and refined shine and sheen. Right away, I liked the charm with my own character, made just for me. It’s special to have something made just for you, but it’s even more special when it has the letter that has a meaning to you. Perhaps you’d like to find your favorite character and create your own charm, too?

If a charm is not your thing, you might want to try their capsule vending machines of embroidered patches! Patch designs are taken from things you see in an ordinary life in Japan—see my red patch embroidered with a little shrimp and えびせん (prawn crackers)? How cute is that? ● Come Play with the Japanese Alphabet

Decoboco Kotonohasha certainly is a unique shop that plays—and lets you play—with Japanese letters and characters. I found lots of fun in the Japanese language, Kanji, and word play, and was, honestly and pleasantly, surprised to see so many types of letters.

I also liked the feeling of time travel a renovated traditional housing generates. It adds to the charm of Kotonohasha and creates a curious space where you might find something that piques your interest and makes you wonder where it came from.

Come play with Japanese words and letters at Decoboco Kotonohasha♪ It’s a place of wonder and fun, where you can find that one and only gift for the special someone whether that person is fluent in Japanese or has never seen the Japanese writing. 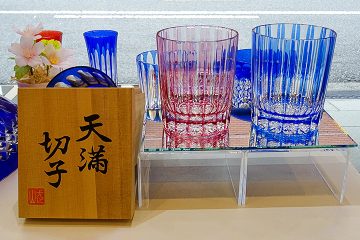 Kiriko is a traditional Japanese craft of cut glass. Detailed patterns are cut into … สวัสดี(Sawadee)! I'm Nulek. I'm from Thailand. I came to japan 5 years ago to study Japanese. … Osaka is Japan’s food capital, known as a city where you “eat ‘til you drop”. Every day, locals …