Japanese ramen is a popular noodle dish sought after not only by Japanese but many people of the world. While shoyu (soy sauce), shio (salt), tonkotsu (pork bone broth), and miso (soy bean paste) are known flavors of ramen, regional specialties and the originality of each ramen shop extend the world of ramen, a dish that’s increasingly becoming a national dish of Japan. Let’s dig into this special noodle soup and learn everything about it!

Ramen is famously known as a Japanese food nowadays, but its roots rest in China. Various theories exist about how it came to Japan but the first known “Chuka-men” (aka Chinese noodles) in Japan was called “keitai-men” and it dates back to 1488 C.E.!
When Japan ended its isolation policy and opened up to the rest of the world in 1859 C.E., Other noodle dishes started to cross the sea from China to Japan and the trend continued through the Meiji Era (1868 – 1912 C.E.). The name “ramen” didn’t exist quite yet back then, though. Instead, the new noodle dishes from China were called “Nanking soba”, “Shina soba” (Shina is a Japanese archaic name for China), or “Chuka soba” (“Chinese soba”), borrowing a familiar term from a common Japanese noodle dish, soba. After the 1923 Great Kanto earthquake destroyed many ramen shops centered around Tokyo and Yokohama, yatai stalls—which were easy to set up—began to pop up all over Japan. Many closed down during the World War II, but ramen became a popular dish everywhere as the number of ramen yatai stalls increased after the war and regional varieties began to appear.

Then came the birth of instant ramen noodles that changed the world of ramen! In 1958, the world’s first instant ramen, Nissin Chicken Ramen was created in Ikeda City, Osaka. This invention helped settle the ramen culture in Japanese homes and solidified the name “ramen” across the country. Since then, a whole variety of ramen has been produced. Today, the evolution that began with the birth of instant ramen is not showing any sign to stop and ramen is extending its reach throughout the world as a popular Japanese food. 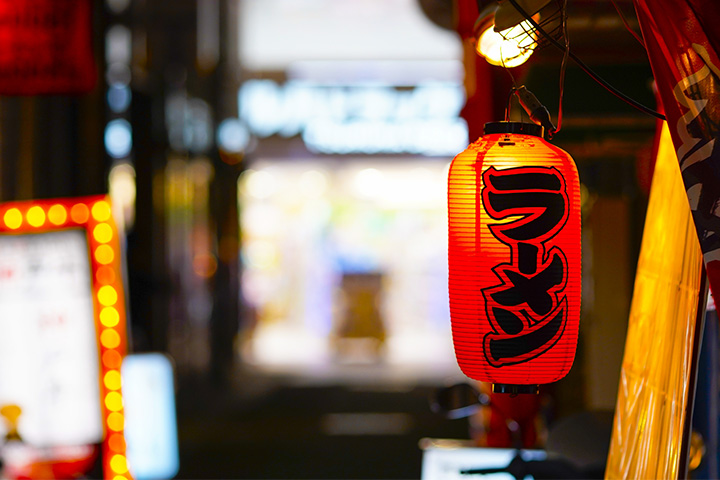 Ramen has evolved uniquely on its own over the years. One of its main characteristics is variety. Broths, toppings, and noodles—they all come in a diverse range of variety, and you can enjoy different combinations infinitely.

The oldest flavor of ramen is Shoyu. Many Shoyu ramen are made with a blend of soy sauce based tare sauce and chicken bone stock. This broth is usually clear brown. Shoyu ramen is typically topped with thinly sliced roasted pork, menma (bamboo shoots), chopped Japanese negi green onions, and seasoned (hard boiled) eggs. Some shops have kept its traditional name, “Chuka soba”, instead of “Shoyu ramen” on their menu.
Different shops or regions use different shoyu tare sauce or dashi broth and noodles, creating a wide range of flavors and richness within the Shoyu ramen category. Tonkotsu ramen is the most dominant in Hakata and Kumamoto areas in the Kyushu region in southwestern Japan. Tonkotsu literally means “pork bone”, which is cooked down to make the cloudy white broth. Thin, straight noodles are characteristically used in Tonkotsu ramen. Simply say “kae-dama” when you’ve eaten all your noodles but still have the soup and want more, and you’ll get a refill of noodles thrown into your leftover soup. Typical toppings on Tonkotsu ramen may simply be Japanese negi green onions, or include sliced roasted pork, wood ear mushrooms, bean sprouts, and nori seaweed. Many shops also offer pickled ginger and spicy pickled takana mustard as additional toppings. 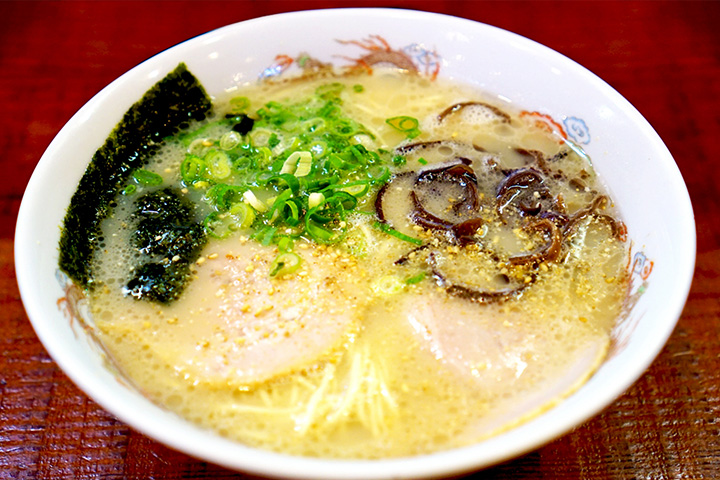 Typically made with chicken bone broth or tonkotsu broth combined with shio (salt) based sauce, Shio ramen is the second oldest ramen after Shoyu ramen. It offers the lightest flavor of all with clear, yellowish soup. Roasted chicken, Japanese negi green onions, and menma are typically used as toppings but stir-fried vegetables are also great on Shio ramen.
Hakodate ramen from Hokkaido, the northern island of Japan, is said to be the origin of Shio ramen. Miso ramen was born in Sapporo, also in Hokkaido. Miso paste is blended into dashi broth made mainly from pork bones and vegetables, and produces its characteristically rich, thick flavor. Miso ramen is typically served with medium-thick curly noodles and topped with an abundance of meat and vegetables. The combination of corn and butter is a popular topping that goes great with Miso ramen. 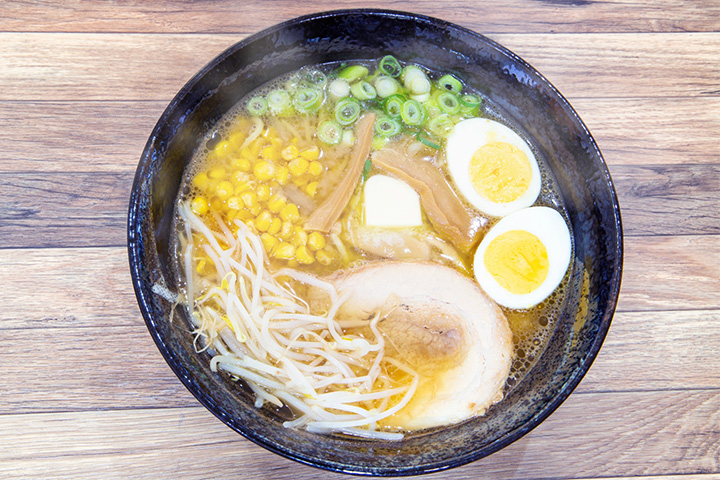 Other than those introduced above, you can also find many other flavors in ramen including Tori-paitan (white chicken broth), Noko-gyokai (rich seafood broth), and Tonkotsu-Shoyu (pork bone soy sauce). What’s more, ramen can be enjoyed in various serving styles—served in soup (which is how ramen is typically known) or with soup (so you can dip the noodles in the soup as you eat) or with no soup (known as “abura-soba” aka “maze-soba”)! The world of ramen is deep…

・Wait for your turn

Because a typical ramen shop has less seating than a typical restaurant, let alone tables for customers (it may be only counter seating), there often is a line of customers outside of a good ramen shop during busy hours. If you see a line of people, join them and get in the line. Some shops may have a signup sheet where you put your name down and wait until called. Ramen is considered fast food in Japan. Eat quickly as soon as it’s served because ramen noodles get soggy and limp easily, which is a big no-no as it loses the flavor. (It’d be considerate for other customers, too.) The average time it should take to eat a bowl of ramen—from when it shows up in front of you ‘til you finish eating—is about 10 to 15 minutes.

・One person, one bowl

Maybe you like to share a dish with your friends at a family restaurant. But at a ramen shop where seating is so limited, it’s only common courtesy to order one bowl per person. Some shops may actually have a “no sharing” rule. Go hungry and enjoy a bowl to yourself. You will likely come across one of the two different ordering systems at ramen shops.
1. If you see a ticket machine (typically set up near the entrance), that means you need to buy tickets to order. Simply select the items you want, buy the tickets, hand them over to staff, then take a seat.
2. If you see a menu on the counter or tables (or don’t see a ticket machine), take a seat then order from staff as usual. You can settle your bill after you eat. The first bite should be just the soup because, with ramen, the flavor of the soup defines the flavor of the dish. Don’t even think about adding anything before your first sip. Enjoy the soup just as it is prepared by the chef.
After the first sip, you are free to eat the dish however you like—slurp the noodles, take a bite of the toppings, whatever. Adding rayu (chili oil) or other condiments found on the table to your ramen is totally allowed. Now you have a basic understanding of ramen, your next step is to eat ramen!
We recommend all the ramen shops that appear in the articles below. Osaka has numerous ramen shops that offer a wide variety of broths, toppings, noodles, and more. Find your favorite ramen while in Osaka!

Osaka Metro’s Ramen Tour
Part I: The Battle of Orthodox vs. Latest Sensation Ramen is a global culinary trend. Many ramen shops have ventured out of Japan and ramen has … Osaka Metro’s Ramen Tour– Part I: The Battle of Orthodox vs. Latest Sensation

A comfort food for the Japanese, ramen is a staple in Japanese food. The wide variety of …