Let’s talk about tea. Tea is a common beverage for the Japanese—the Japanese loves a cup of hot tea to relax after a meal and often grabs one of many kinds of bottled tea at a convenience store or from a vending machine to keep hydrated throughout the day. For the Japanese, the quality of the hot tea served with the oshibori hot towel at a restaurant is indicative of the quality of the food to follow.

Matcha is probably the most well-known Japanese green tea outside of Japan. Perhaps you’ve participated in a tea ceremony while visiting Japan? If not, or if you’re looking for something different next time, look around and you can find unique tea ceremony experiences—a tea ceremony in the dark or a tea ceremony outdoors—like the ones in the photos below! 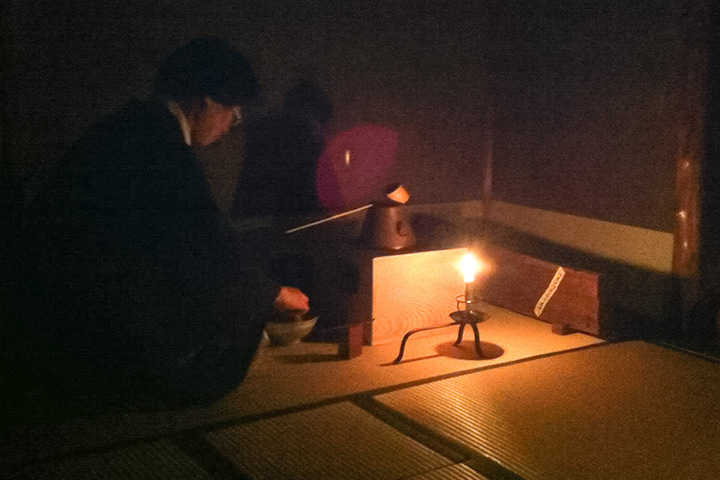 Let’s explore the world of Japanese tea together!

● Tea and the History of Japan

In the spring of 2021, the Japanese tea industry was shaken by a piece of news: Shizuoka Prefecture lost its first place in gross tea production (total sale revenue) to Kagoshima Prefecture after 50 years of dominating the industry!

2019 Gross Tea Production
(by Ministry of Agriculture, Forestry and Fisheries)

Many of you have probably thought Shizuoka and Kyoto were the top producers of tea in Japan…? Let me explain. The key for understanding the competitive landscape of the Japanese tea industry is in Japanese history! By mid-15th century, Wabi-cha—”tea of quiet taste” reflecting the Zen doctrine—was created and a tea master named Sen no Rikyu perfected the origin of tea ceremony, which subsequently became popular among samurai warriors. Tea from Uji was valued highly and prized by those in power at the time including the “three unifiers of Japan”—Toyotomi Hideyoshi, Oda Nobunaga, and Tokugawa Ieyasu—three samurai warlords known for ending the chaotic Sengoku period (Age of Warring States.)

As the era of samurai ended and the Meiji Period (1868-1912 CE) began, samurai warriors who lost their jobs cultivated tea farms in Shizuoka Prefecture which later became a main producer of tea. In Kagoshima area, on the other hand, tea production didn’t thrive until after the World War II. Nevertheless, Kagoshima developed into the top tea producing center as the region is blessed with a temperate climate and flatlands and mechanized their tea production processes over time.

Let’s take a look at most popular types of green tea. Color: Clear, pale yellow green
Flavor: Has a rich sweetness and umami
Aroma: Has a unique aroma similar to aonori seaweed
Characteristics: Gyokuro is a premium tea that was cultivated in the shade to avoid direct sunlight. The best way to enjoy Gyokuro is in small sips out of a tiny tea bowl. Color: Bright creamy yellow green
Flavor: Has a rich umami taste and a strong bitterness
Aroma: Has a fresh aroma of tea leaves
Characteristics: Matcha is made of Tencha tea leaves cultivated in the shade and stone-ground. Unlike other types of green tea, you can benefit from the nutrients from the whole tea leaf with Matcha. Color: Bright brown
Flavor: Easy to drink because it’s low in caffeine and tannin
Aroma: Fragrant and rich
Characteristics: Sencha, Bancha, or Kukicha are roasted until the tea leaves turn brown to make Hojicha. The distinct flavor of Hojicha is popular and found in food products such as puddings and chocolate in recent years. Color: Light yellow green
Flavor: Has a refreshing flavor; low in bitterness and astringency
Aroma: Has the fragrance and sweetness of rice
Characteristics: Genmaicha is a blend of tea leaves and toasted rice. Sold as a Japanese flavored tea, Genmaicha is also popular outside of Japan.

Japanese green tea used to be used as medicine. Its unique flavor of bitterness, astringency, umami, and sweetness is closely related to its nutritional benefits.

Catechins that make up the astringency of green tea are high in anti-acidification qualities and help prevent lifestyle diseases such as aging and obesity. Catechins also help prevent common colds due to its antibacterial effects; gargling with tea during the common cold seasons can be effective in reducing the risk of getting a cold.

Caffeine helps with staying awake and recovering from fatigue. Caffeine is the source of bitterness of green tea and is found in higher concentration in Sencha and Gyokuro.

L-Theanine is a type of amino acid that serves as the source for umami and sweetness of green tea and helps relax the mind and the body. Premium tea such as high grade Sencha and Gyokuro are higher in L-Theanine than other green tea. High temperature water is said to bring out the nutrients of catechins and caffeine more. Perhaps you can benefit from the power of green tea better by adjusting the temperature of the water for different situations—hotter in the morning or when you want to focus and lukewarm before bed or when your stomach is a little upset.

Tea is so close to the Japanese everyday life; you can find lots of tea related phrases in the Japanese language.

When the stem of a tea leaf floats vertically in the tea, it is a sign of good luck! It is considered a lucky omen because of its rarity, but the incidence of Chabashira is super rare nowadays as tea pots with a mesh strainer has become more common, preventing the tea stem to flow out into the tea cup.

“Ocha wo hiku” (literally “to grind tea”) means you have nothing to do and have too much time on your hands. The phrase derived from the fact that, in the past, female prostitutes at brothels ground tea leaves when they didn’t have any customers.

“Ocha wo nigosu” (literally “to muddy the tea”) doesn’t mean to muddy the waters. Rather, it means to evade a situation by sidestepping or saying something half-baked. Making the tea muddy to make it look like Matcha not knowing the protocol of the tea ceremony is said to be the origin of this phrase.

The world of Japanese green tea is deep. I only covered the basics in this article, but there is so much more to explore—from how to brew good tea to various utensils used in tea ceremony to how to enjoy tea. I’ll continue to share as I research more and explore Osaka to find cool Japanese tea experience. Stay tuned! Having a cup of tea is a great way to escape from the daily turmoil and relax. In recent years, … The Seven Wonders of Shitennoji Temple

Hi! I’m Andy. I’m from the U.S.A. I’m fascinated with the wonders of Japanese temples and …