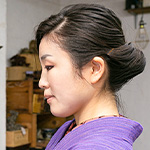 Yui-on Chaho is located in the Tanimachi 6-chome area of Osaka, aka “Tani-roku” by the locals. This area flourished as a castle town when a samurai feudal lord Toyotomi Hideyoshi (1537-1598) who built Osaka Castle was in power. Towards the end of the World War II, the neighborhood miraculously survived the Bombing of Osaka (1944-1945) and, today, its preserved retro townscape gives the neighborhood a distinct character.

Yui-on Chaho stands among rowhouses in a narrow alley, only a 4-minute walk from Osaka Metro’s Tanimachi 6-chome Station. Spacious interior with a simple counter and tables is comfortable and makes you feel nostalgic. Built in 1907, the café was formerly a minka, traditional Japanese housing. The owner, Yamaoka-san, renovated the old housing into a beautiful café space all on his own. Café’s antique furniture pieces that represent the life before, including the cupboard and hibachi (brazier), are from another minka Yamaoka-san helped to dismantle. Various artwork on the wall make a great addition to the space and, together with the creation from the old world, create a classy, stylish space. Yui-on Chaho operates as a tea room during the day and as a bar at night. Their “Hoji Inari Gozen” lunch includes rice cooked in Hoji-cha tea with abura-age (deep-friend soy bean curd), a popular menu that attracts many lunch customers. At 6 pm, the place turns into a bar that serves cocktails made with Japanese tea.
※Reservations may be required due to Osaka City’s requests in order to prevent the spread of novel coronavirus. Typically, tea is sold as a blend, a blend of the same type of tea leaves made by different producers. This makes the flavor consistent—you can expect the same flavor when you buy a certain type of tea, whether it’s Hoji-cha, Genmai-cha, or Ryoku-cha, for example. The Uji tea used at Yui-on Chaho, however, is all made at one single tea farm in Uji, Kyoto. Like single origin coffee, this means the tea served at Yui-on Chaho comes from a single producer who does it all—growing the tea trees, processing the leaves, and manufacturing the tea. Unlike blended tea, tea made by a single tea producer has a unique flavor and aroma. And the flavor changes through seasons and over the years, which requires adjustments in tea preparation in order to have the best experience with the tea at a given time. You can order a cocktail by selecting your choice of tea (choose from Sencha, Kabusecha, Gyokuro, and Karigane) and your choice of liquor. The tea cocktail is served as a course—the first course is the tea itself and the second course is the cocktail. There were too many combinations to choose from, so I ordered Sairo which uses the plum wine as the base and mixed it with Gyokuro. Tea cocktail was unlike anything I’d known. Gyokuro’s mellowness was perfectly blended with the acidity of the plum wine and a faint aroma of flower, creating a delicate yet stimulating flavor that you’ve got to try for yourself. It is a unique and distinct experience—you might come out of it with a new outlook on the world.
A fair warning though—don’t indulge too much. This cocktail is easy to go down but it’s also high in alcohol content!

The course also included tea grounds…yep, used tea leaves for you to eat! I’d never eaten tea grounds and was a bit nervous, but it turned out quite good. I poured a little soy sauce (see the little white birdie sitting next to my cocktail in the above picture?) and it tasted like Ohitashi, a classic Japanese side dish of leafy greens boiled and immersed in dashi-based sauce (and typically topped with dried bonito flakes). Apparently, you can’t make this edible dish with any tea—it’s only possible when you have one single variety of tea leaves AND when the stems are removed very carefully.

Here’re three tea cocktails Yamaoka-san recommends:
・Sairo 彩露: Plum wine based; fruity. Has an aroma of violet, mint, and cherry blossom.
・Ryoryu 涼流: Gin based. Has a clean finish and an aroma of cinnamon.
・Ho 穂: Sweet potato shochu based; sweet. Has an aroma of plums.

Only high-quality tea that you can rarely find in a market is used in these cocktails. That makes having a cocktail at Yui-on chaho a sumptuous and extraordinary Japanese tea experience. Yamaoka-san kindly offered us Ohagi (Japanese sweet rice dessert) from the café menu that came in three flavors: Genmaicha, azuki beans, and Hojicha. His wife is in charge of these café and lunch menus, all made to order and served deliciously warm. I liked how these warm sweet rice balls matched the cool cocktail.
Japanese tea flavored Nama-Chocolate (Japanese ganache) is usually served at the bar, a must try for tea and chocolate lovers.

● Heresy or Preserving the Tradition? Meet the Owner

The top reason to visit Yui-on Chaho in the evening may be the owner himself.
Yamaoka-san was only 20 years old when he came up with the unique concept of Japanese tea cocktail about 20 years ago. He then acquired an experience as a bartender in Minami, the heart of Osaka’s nightlife, and opened Yui-on Chaho in Kitahama as a members only bar when he was 30. When Yamaoka-san came up with the idea of opening a bar, he didn’t just open the bar but instead spent time seriously studying tea to become a true pro. He went to Yao and learned from people in the tea industry and, as he learned about tea leaves and tea preparation methods, he became interested in pursuing the Japanese tea. “With Japanese tea, there is no theory for the best tea prepration. The flavor changes depending on the type of tea leaves and the timing of the harvest, and the flavor changes with the different equipment you can use. You have to be flexible. Even when you use a cast iron kettle (which supposedly makes good tea), a brand-new kettle out of the box actually doesn’t work well. If you break it in over time, though, it brings mildness out of water.” Yamaoka-san doesn’t look at this as a limitation, however. Instead, he looks at it as being given options. “The deeper I dig, I get more. That’s what’s fascinating about tea.”

Reponses to the idea of introducing a new way to enjoy Japanese tea were mixed when he started the business eight years ago. Today, the customers that visit Yui-on Chaho are diverse and include the general population, people in the tea industry, Japanese tea specialists, and baristas. Rumor has it that some of these customers engage in a serious competition in pursuant of the best cup of tea… Maybe you get lucky and witness an interesting debate about Japanese tea when you visit Yui-on Chaho?! 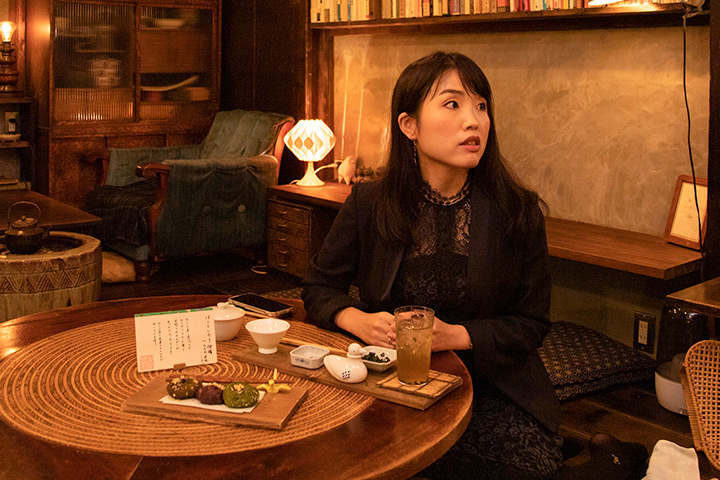 My last question for Yamaoka-san was something I’d been wondering for a while. Did he always like Japanese tea? Is that the reason he started this bar?

“Not at all! What I like to do is to create a new perspective of the world. Japanese tea is merely a method to do that. My hope is to create an outlook on the world with tea at the center.”

Some know that the tea connoisseur entrepreneur wears another hat as a creator of sound installation. He regularly hosts music events and art exhibits at his shop, but I think the whole shop—the space itself—is his work of art. It reminded me of saji (or chaji; a tea gathering that consists of a full course meal and two types of tea ceremonies, typically lasts several hours). It’s often said saji is not simply about drinking tea but it’s about creating harmony (among the tea, the tea equipment, the setup of the teahouse, etc.) and a world in which the guests can truly enjoy the tea.

Before we go too deep, I’m going to bring us back to tea.
According to Yamaoka-san, we’re just entering a great season for Japanese tea and tea cocktail.
“Spring is the season for refreshing Shincha (newly picked tea), and fall is the season for savoring tea’s umami. Come see us at Yui-on Chaho. We will have a truly good Japanese tea ready for you to enjoy.”

[Access] About 4 mins walk from Exit 4 at Tanimachi 6-chome Station.
[Hours] 12:00 pm – 5:00 pm, Saturdays 12:00 pm – 4:00 pm *Reservations required for the bar
Business hours and closures change without notice because of the evolving COVID-19 situation. Please check the official website for most updated information.
[Closed] Mondays and the third Tuesday of the month **Subject to change due to events Spring is here! Here in Japan, spring is when Sakura trees bloom and everyone gets out and enjoys … 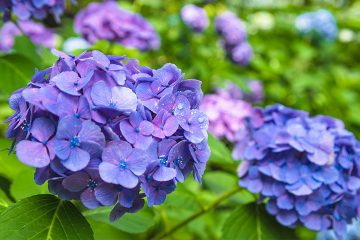